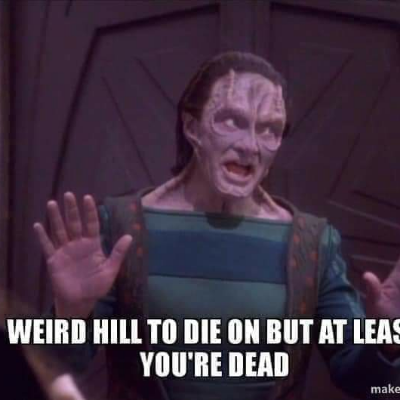 The one failed prediction that never ceases to crack me up is the (correct) prediction that text will be stored and read on handheld devices, but the failure to imagine that more than one thing could be stored per device. They were so close! The image of a desk or room just littered with ipads to signify a character doing a lot of research is absolutely hilarious. Here borrow this ipad it has my favorite book (singular) on it.

Where do they keep all these pads? We don't see them on book shelves. 1 pad per book doesn't even save that much space as far as physical storage.
They could imagine an immense amount of data stored on a central computer, and that data could be stored on a handheld device, but they scaled it down waaay too far.

@Literalham this is the same universe that only uses terrible chunky laptops on desks, but at the same time has a handheld scanner that can do almost anything, including interface with previously-unknown computers without a physical connection

@Literalham not to mention they have a crazy high-speed wireless data system, but turn in reports and hand out letters and such by walking to the recipient and giving them a padd

@Literalham I dunno. If I had the ability to get an arbitrarily large number of e-readers out of a magic cabinet in the wall, I might cover my desk with them, so I could spread out and have multiple documents open simultaneously. Then, when I'm done, they go back in the reclamator so their molecules can be turned into shoes.

Yes, it probably *was* a failure of imagination on the show-makers' part, but they went with something that looked "natural" to them, and by the same token it might be an accurate portrayal of *somebody's* workflow, for purely psychological reasons.

Likewise, when the ensign says "here's today's alpha-shift log" and hands the lieutenant a physical PADD with only one document, there's no distraction. The salience of the document is underlined. The 1,001 diversions and focus-destroying temptations of a smartphone simply don't exist.

@Literalham The characters of TNG generally seem to have a healthier relationship to information technology than the real Earth of 2020. The Doylist explanation is probably that the show's creators were making a mostly optimistic series for network TV and wouldn't have gone with worst-case scenarios, even the grimmer takes that had already been imagined (TNG came a few years after classic cyberpunk started). But I like to speculate: What's the in-universe, Watsonian explanation?

It's like those moments in the Enterprise-D hallways when a little kid talks about their calculus lesson. The Doylist take is that they threw in something science-y and maybe wanted the vibe that everyone on the ship is really well supplied with smartness. A Watsonian take? Perhaps centuries of practical experimentation have actually brought progress in educational techniques, and by understanding psychology better, we can teach better.

@Literalham When you strip away Roddenberry's own smugness --- which really shoots through the first season --- the ethos of peak TNG seems to be that people haven't *changed*, intrinsically, but we *have* had the opportunity to understand ourselves a little more. It's a utopia not just of post-scarcity, but of post-scarcity enabling maturity. So, just for fun, I like to kick back and wonder how many of those '80s and '90s design choices, like the slow rate at which text appears on screens and the noises it makes when it does, are "really" the result of Federation UI/UX engineers optimizing for psychological health because, unlike ours, they don't have to optimize for clicks.

@Literalham Hypothetically, I could see someone using multiple PADDs to organize what they're doing, like having multiple monitors on a desktop or comparing things side-by-side, (sometimes moving your head is less disruptive to your train of thought than shuffling windows or tabs) but the show gets ridiculous with the stacks.

@Literalham They don't have 1 book per pad, it's 1 book (maybe more?) per data card, which is about the size of an SD card. They use multiple screens so they can read more than one book at a time. Just like "windows" on your desktop except not stuck in a tiny frame.